Pooch Glamour is now home to 15 Lhasa Apsos. All of them have a free run inside the house. All of them are part of the family. Right now we live in Capas, Tarlac and every time we head home to Manila for a few days or a week we bring all our dogs with us. We usually bring two SUVs with us because we are always unable to fit all our things in one car. 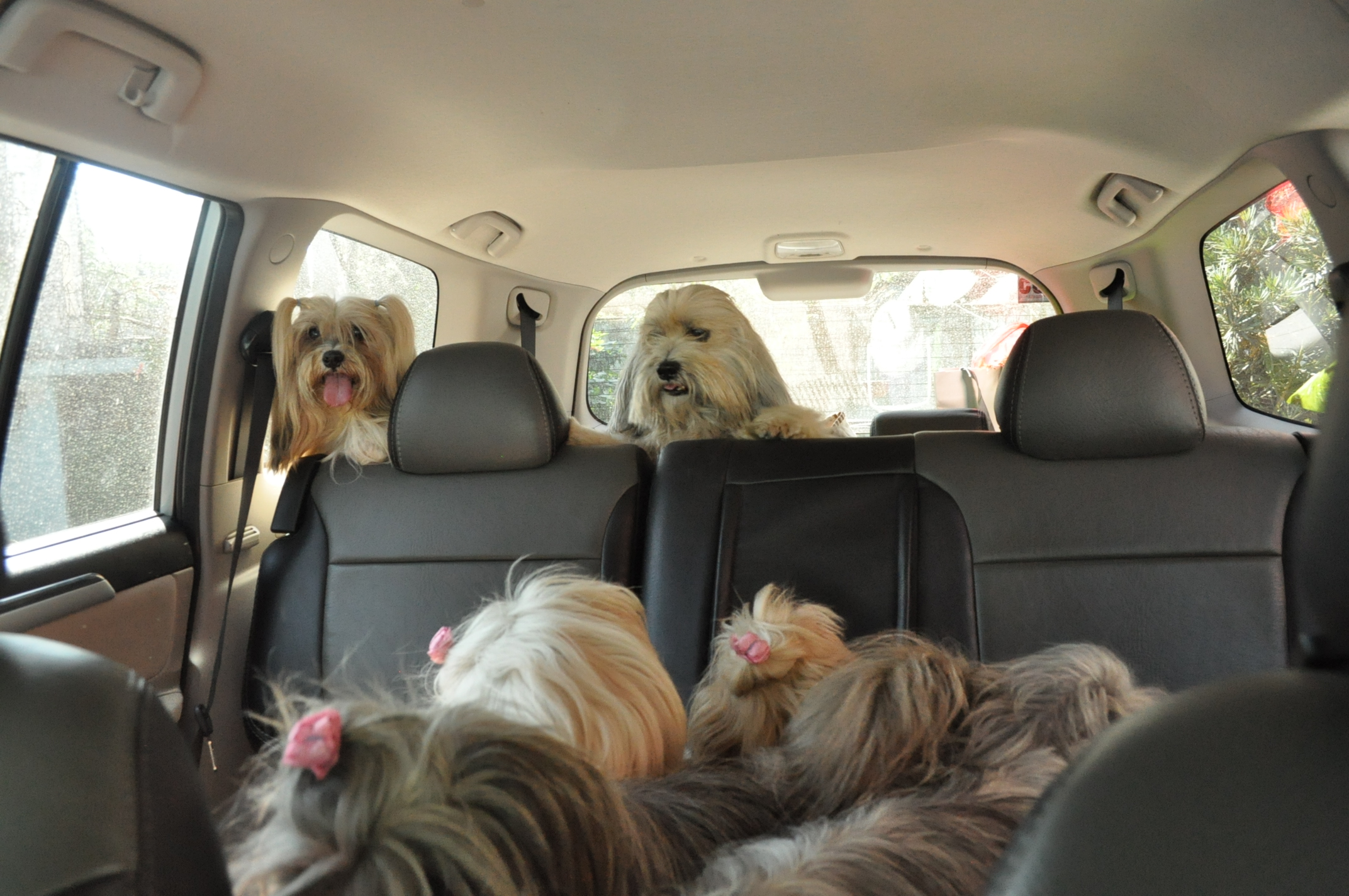 It is always fun to travel with all my Lhasa Apsos. They are always excited for the new adventure that awaits them, be it a trip to the park, the mall or travelling to and from Manila. But vet trips are on the bottom of their favourite destinations.

Dogs should always have fun and relax and BE DOGS. We should let them run free and play and explore the world around them. I always enjoy watching them when they are enjoying the weather with all their feet relaxed on the grass. I am happy when they are happy and my relationship with them grows even stronger. 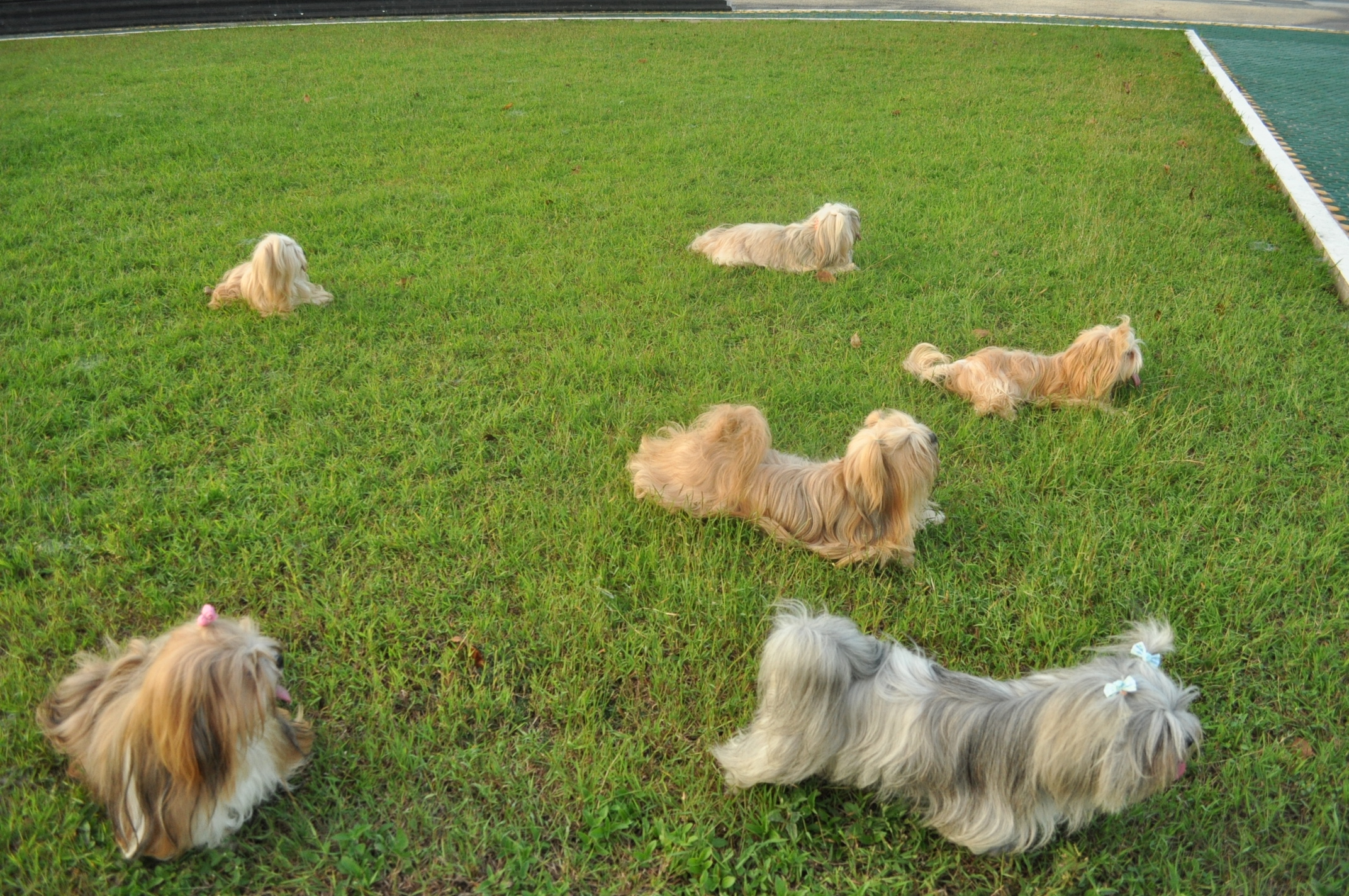 I am writing this because I find so many people with so many dogs who have lost the connection with them. I hope that when people acquire dogs they spend a lot of time with them. Give them more hugs and kisses and get to know each of them better. 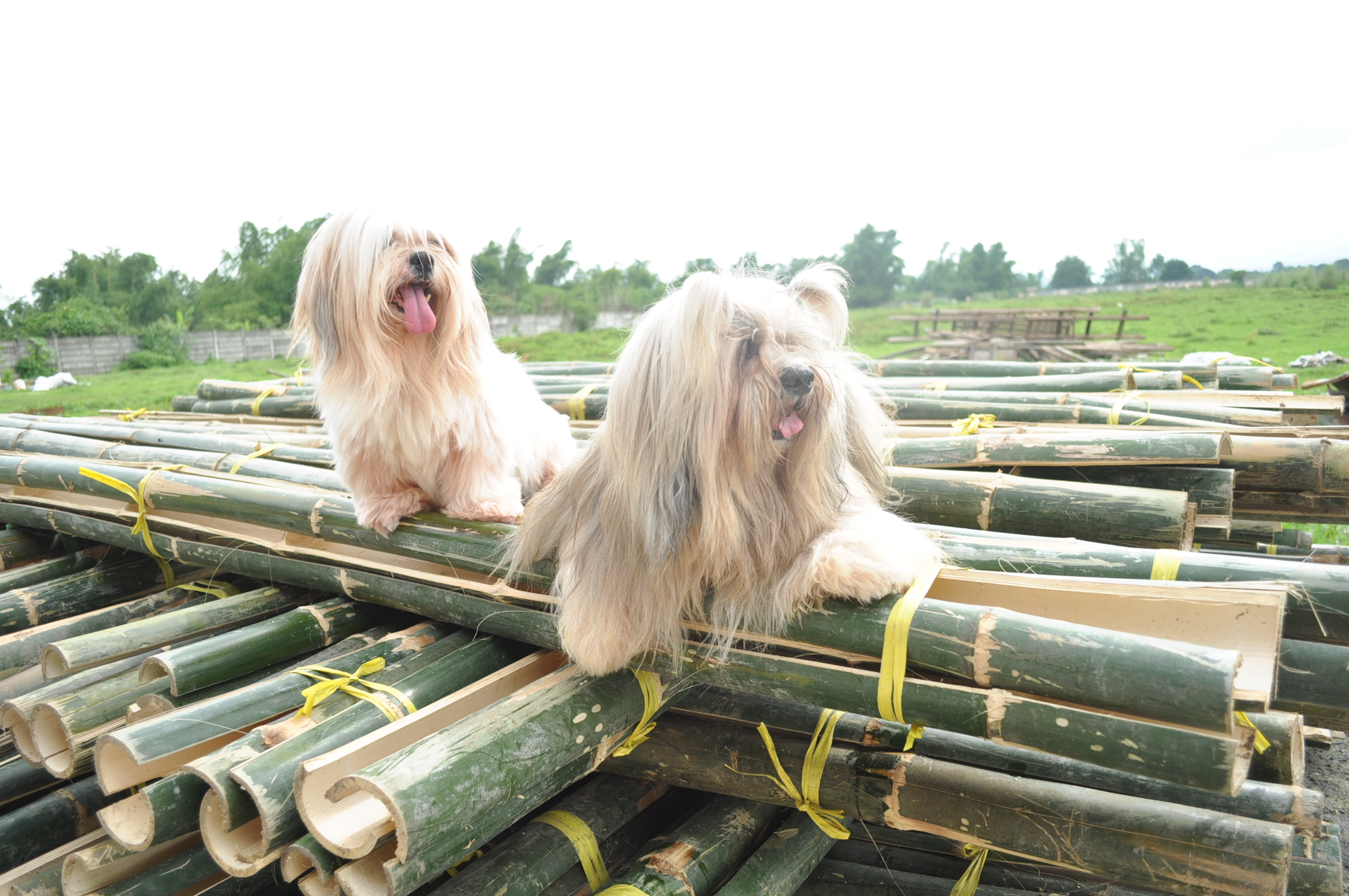 Living with happy dogs makes our life happier. Dogs also teach us patience, offer unconditional love and provide us the daily joy of having a best friend by our side. 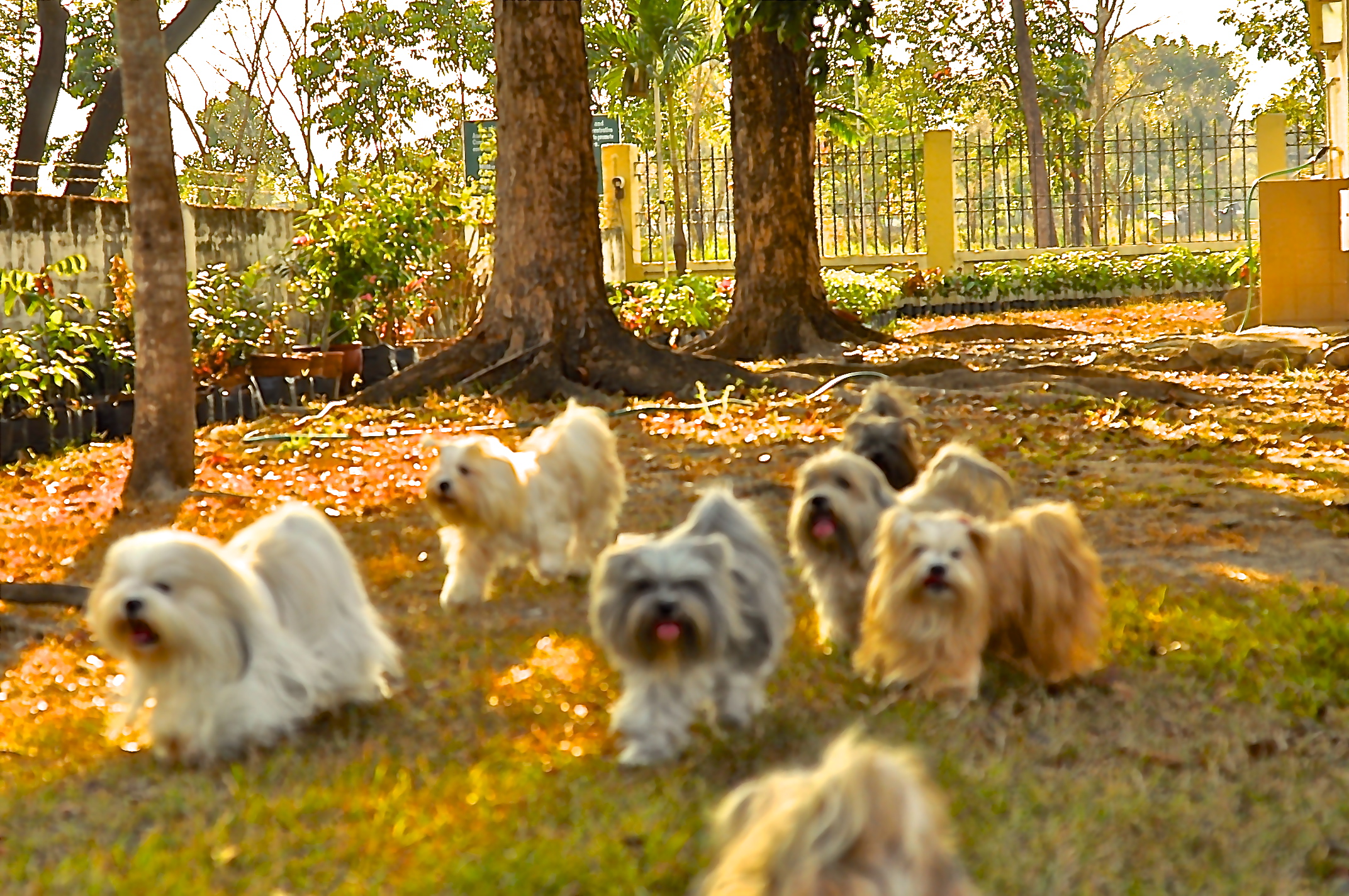 I have always been asked how I take pictures of my dogs in group shots. I usually take their group photos either very early in the morning around 7-8AM or late in the afternoon around 4-5pm. For me those are the best times I can get them to stay still and be relaxed. I usually shoot them at least 4 hours after meal time.

At first taking photographs of multiple dogs might seem like an extremely challenging task. But from what I have noticed, owners who do not keep their dogs in cages, crates and kennels for most of the day and for most of their lives are easier to work with in photographs. Here is a photo I have taken yesterday at the park after my Lhasa Apsos had a good run for 20 minutes. They patiently waited for me to get a good shot of them. 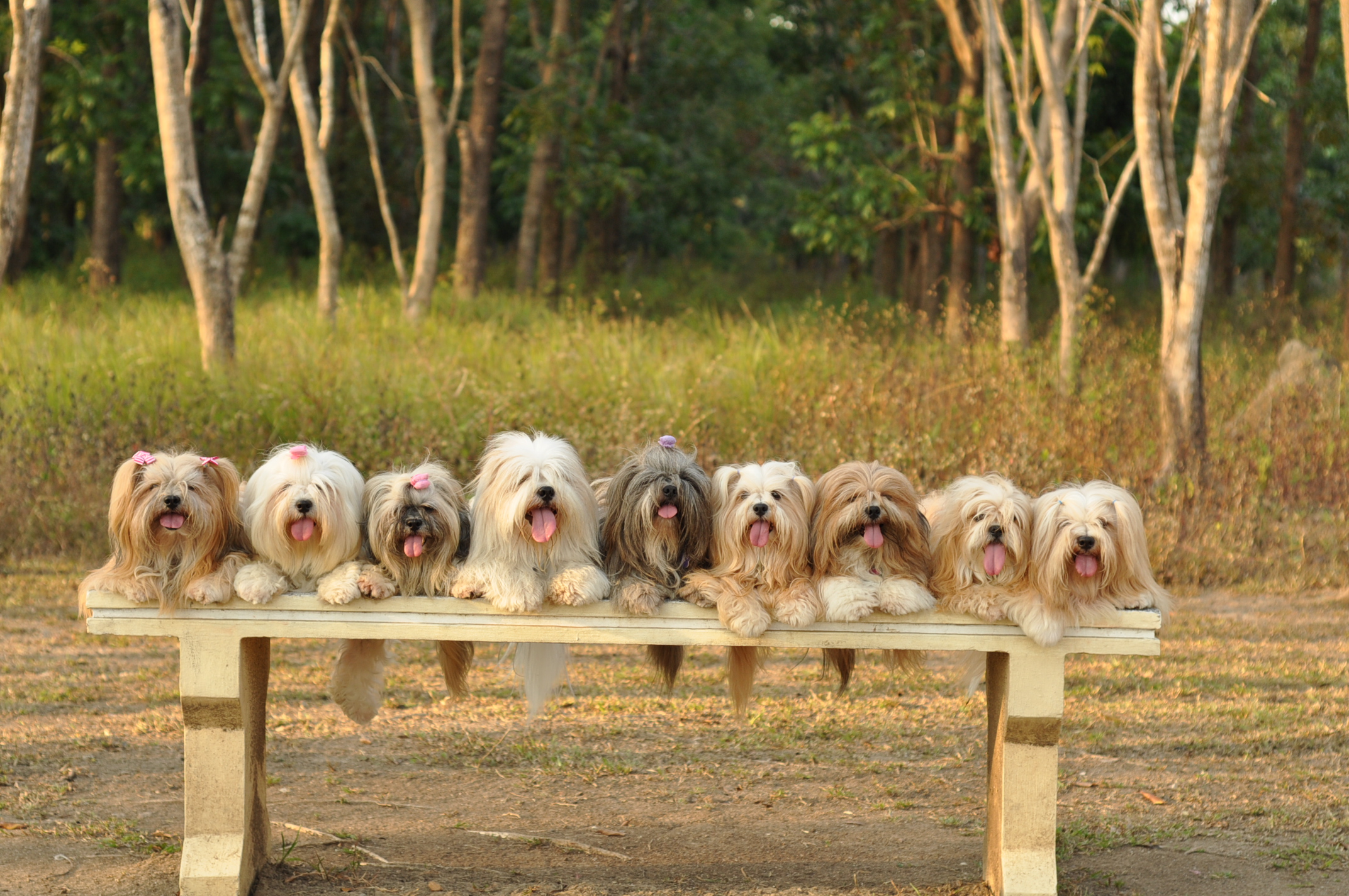 My next tip would be to place small dogs on a bench or in cute little buckets to create a fun backdrop for your portrait. I like using chairs, benches, tables for my group photos. Some days some dogs like to jump off and never want to stay still for the camera and some days I am just lucky that everyone wants to stay still for Mommy (Me). 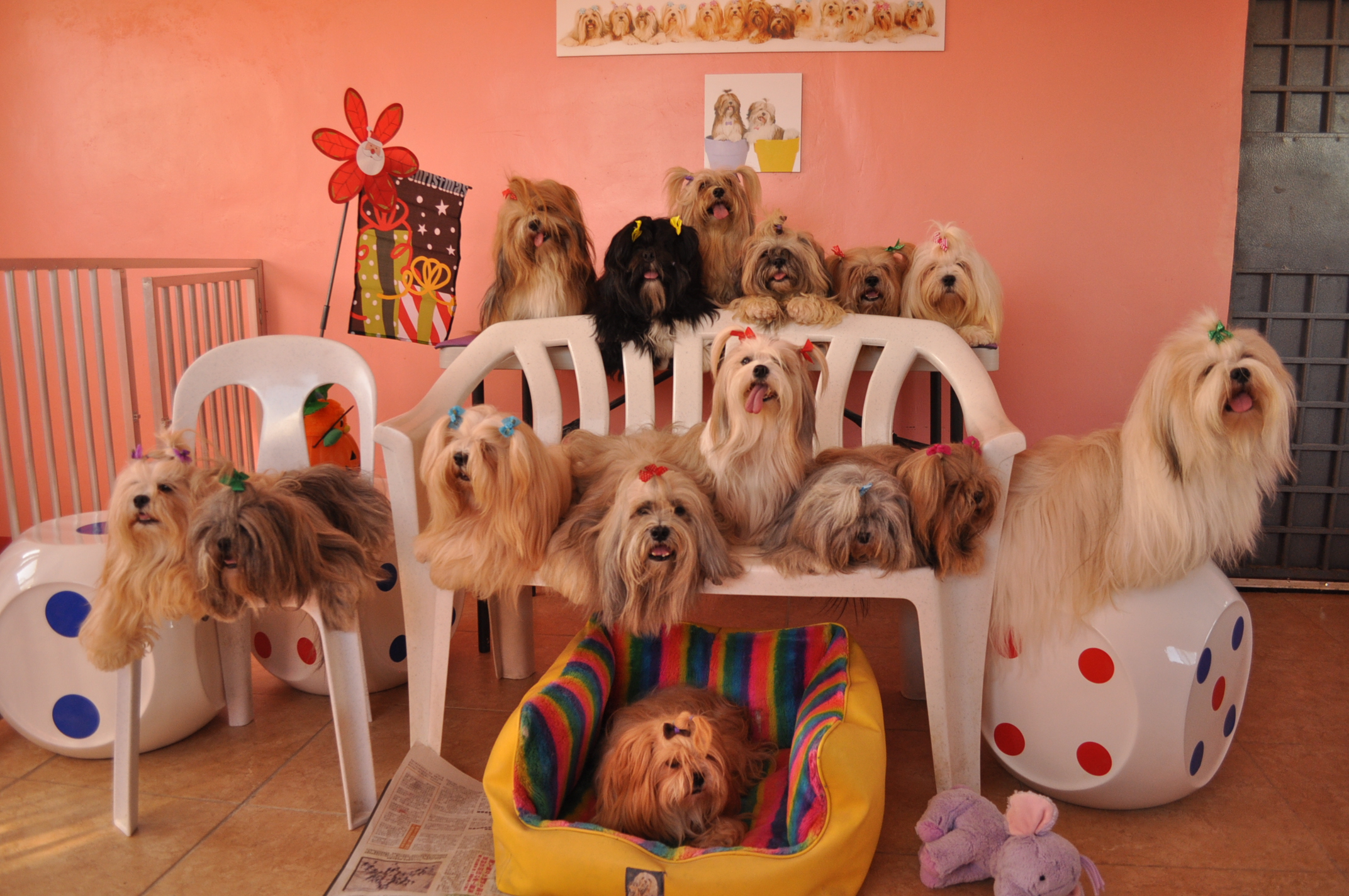 When photographing multiple dogs, use sounds to get their attention and call the names of the dogs that are not looking at the camera. If they do not obey, BE PATIENT. I also do not groom them right before taking their photos. I want them to feel relaxed and I want them to look natural. 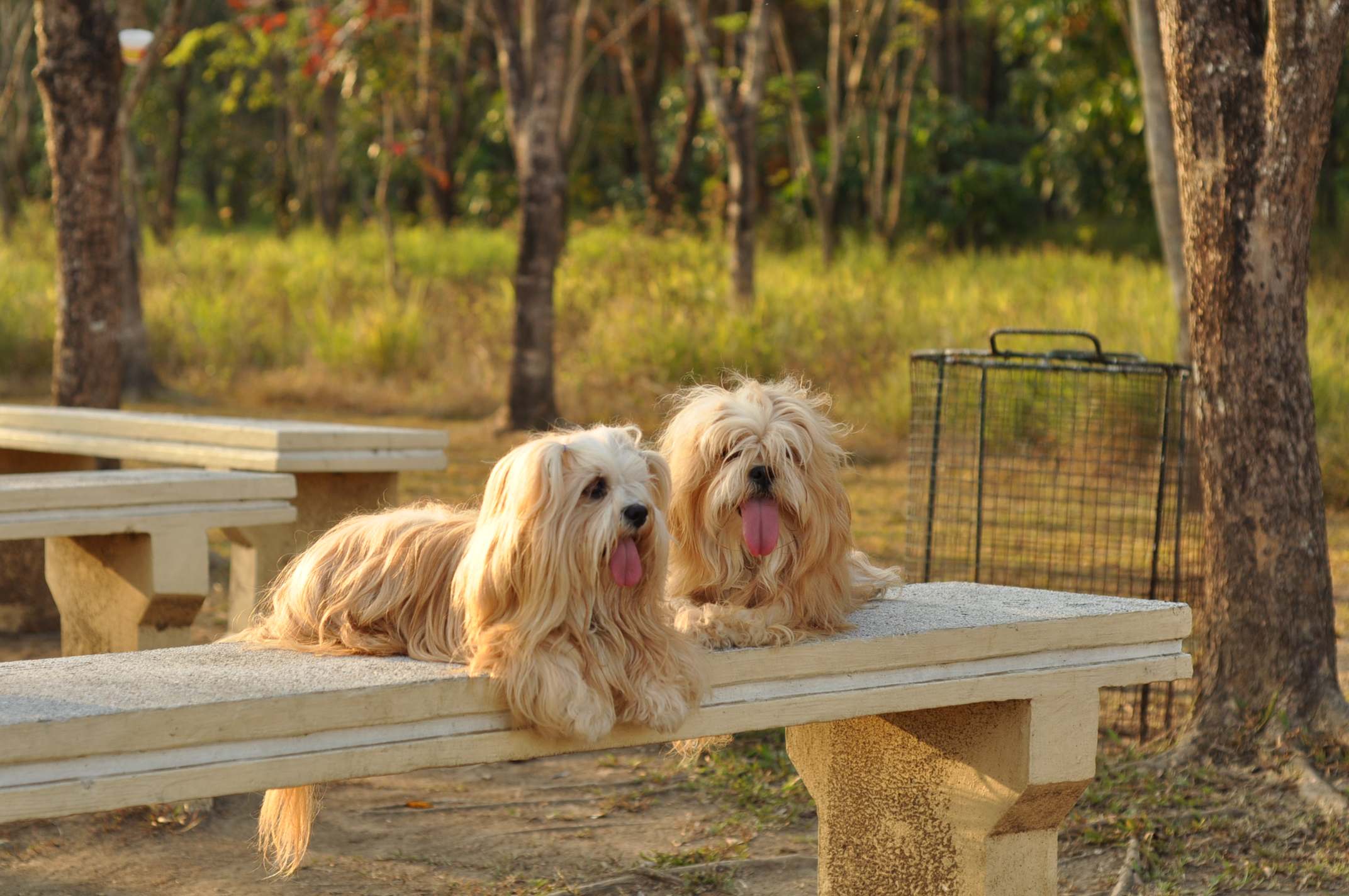 I like to sit on the floor and be at my dog's eye level. I usually get better photos when I am not on top of them. This approach allows me to have a better view of how they interact with each other and gives me a greater story to tell. 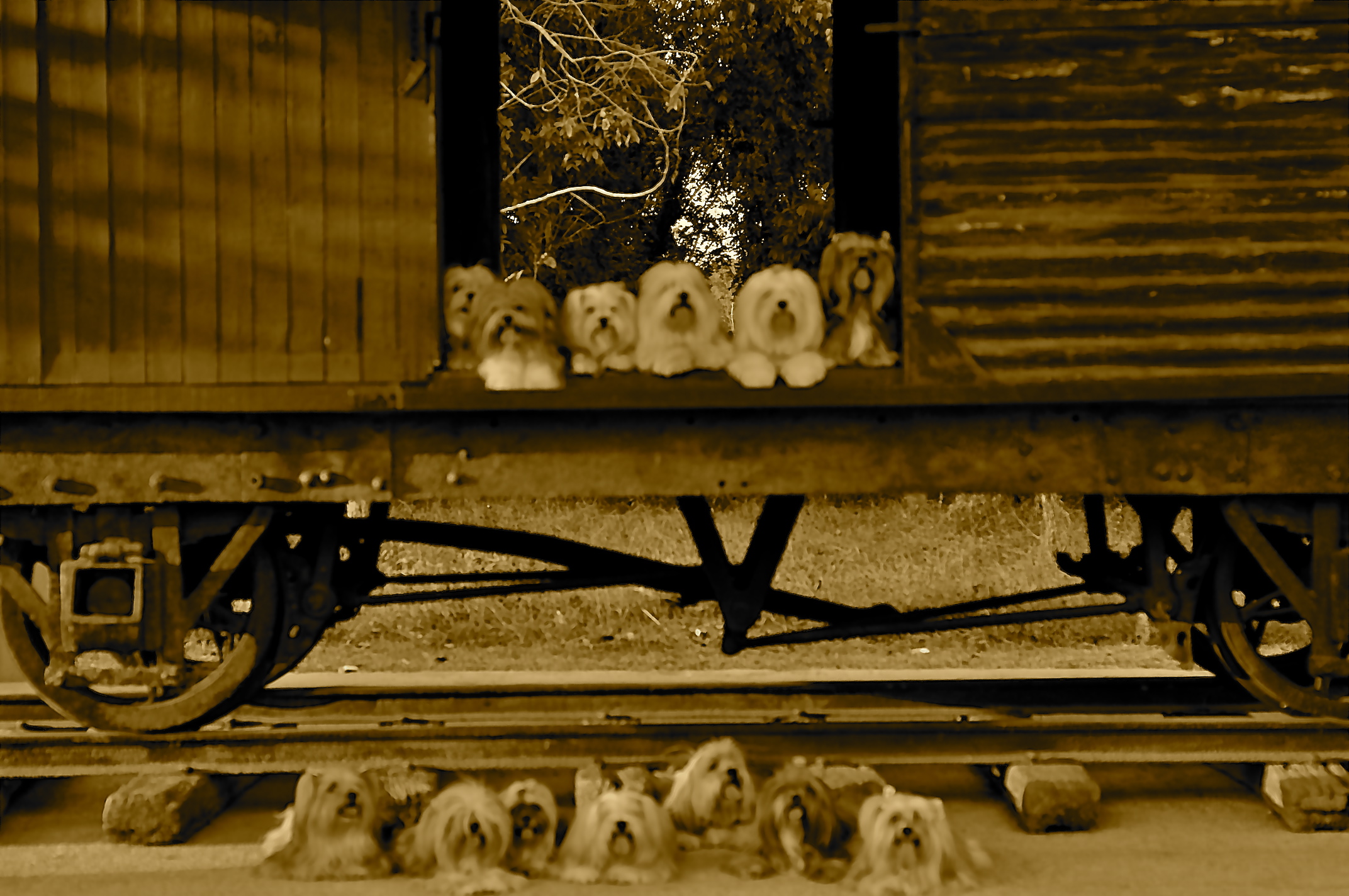 Last July we started to train Bruce for the dog show. He was a year and a month old then and he wasn't very keen on the leash. He would prefer to sleep rather than train. So we made it fun for him. We trained him to stack and gait with the help of a trainer. Right from the start he already was a well balanced dog. When he is moving or standing he already produces a harmonious image. On other days we bring him out to the park and let him run off leash so that his muscle is well conditioned.

Two weeks ago the Mega trade Hall was packed with pedigreed dogs from all over the world  representing their respective breeds. Hundreds of SUVs and minivans were filled with crates, dryers, hairsprays, toys, treats, electric fans, ice chests, and all sizes and shapes of grooming tool boxes for their dogs. And then there were more humans, the exhibitors, the judges, the stewards, the handlers, the spectators, and everyone else who came as excited as we were to see the best dogs at the Philippine Circuit.

For four days from January 23-26, 2014 Megamall became a dog town. Within hours the trade hall was transformed into a dog ville transformed into a warren of crates, table, chairs, and an exponentially numbered of hair sprays, chalks, combs and brushes I have ever seen in my life. And then there were those exhibitors who groomed their dogs very very early and continuously trimmed and toiled throughout the rest of the day for four days and all they did was trim and groom their dogs to perfection you wondered how such outlandish and time intensive hairstyles made them still sleep at night. 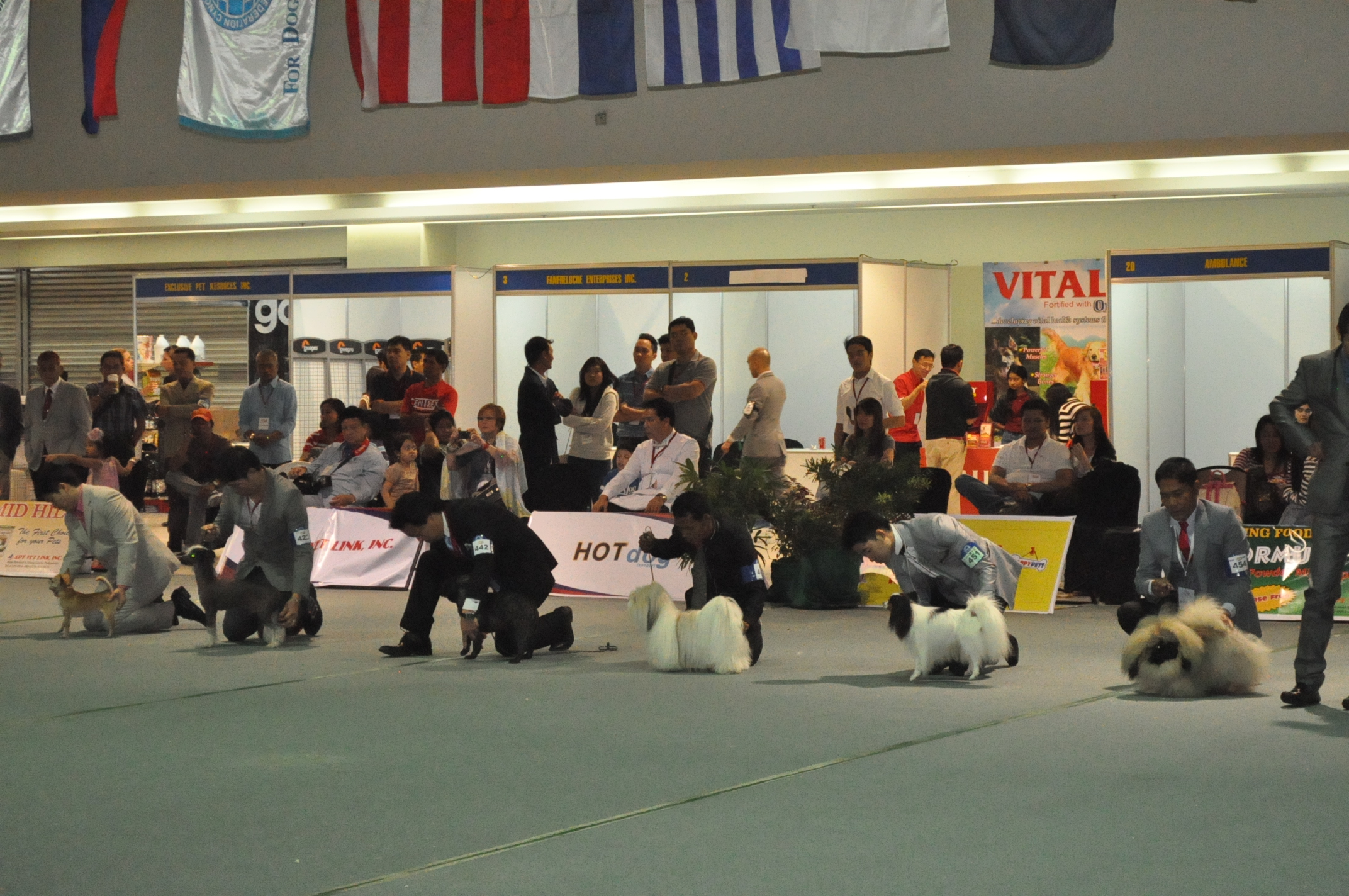 As a first timer I brought my Brucey to do the shows "Au Naturel". I thought that it was a violation of the rules to put any product to a dog that will alter its appearance. But as I strolled around the holding area you will see all these things open in use. There are powders, thickeners, hair sprays, dyes, make up for snouts, markers for touch ups and more thickeners. 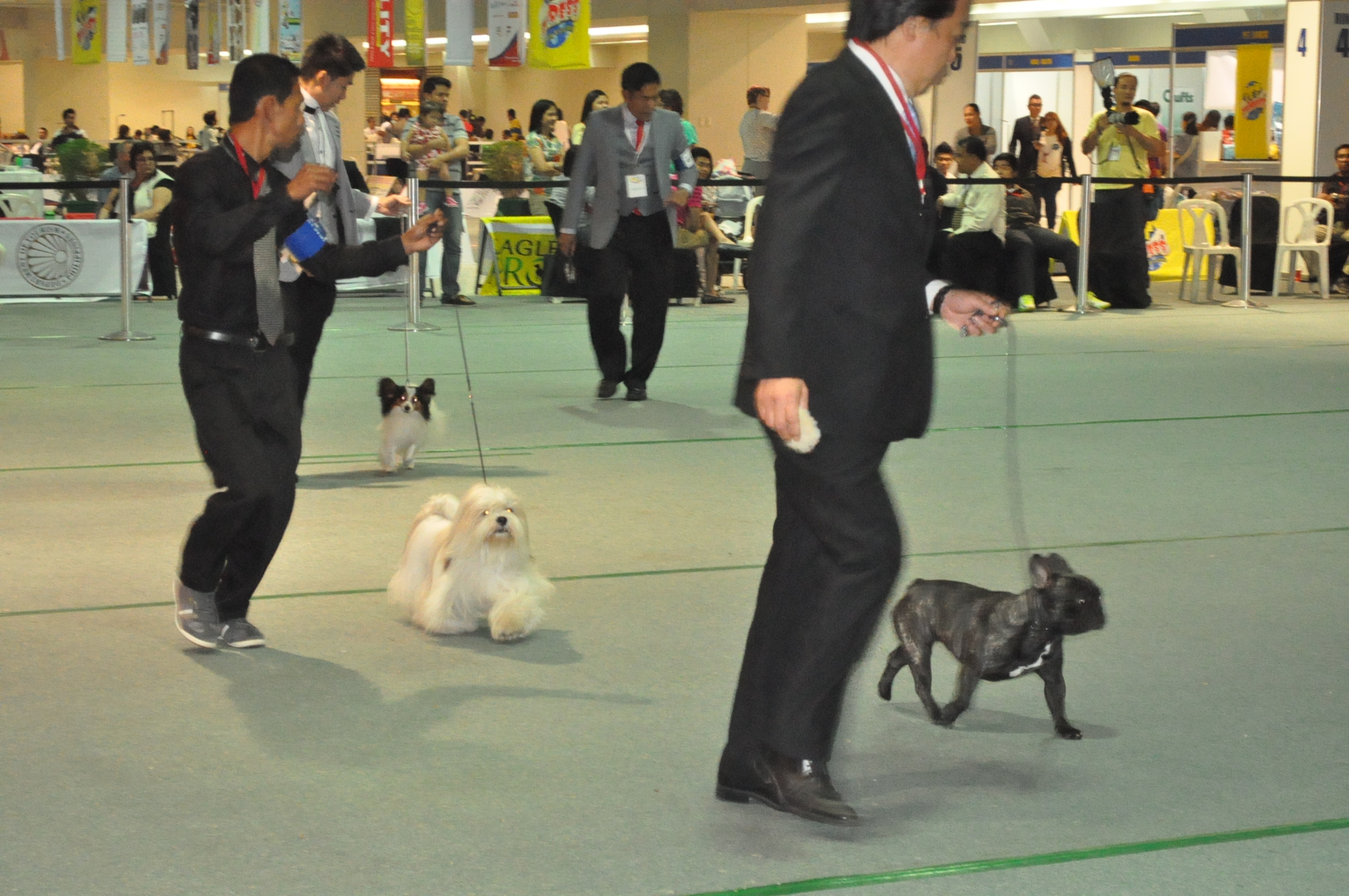 The end result of breeding done well is that we have great dogs like Bruce. Blanziflor Jp Bruce Wayne imported from Japan is a beautiful Lhasa Apso. He is not perfect (as no dogs are). But he is wonderful example of the breed and I am very proud to be his owner. 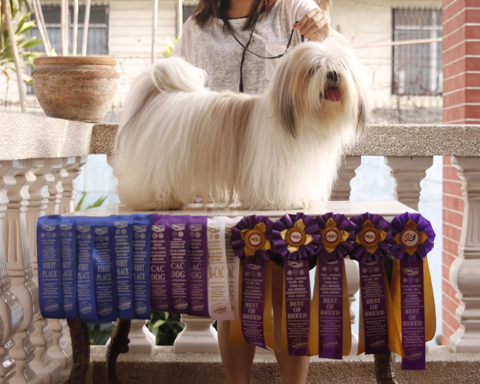